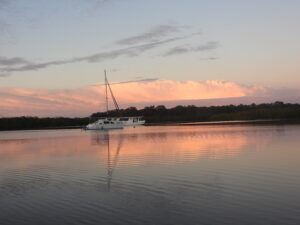 1. Introduction
This is my second report since I was elected President of TAPP at the AGM in 2019. It has
been a pleasure to work with a very professional committed Executive group: Brady Sullivan
(Vice-President), Ken Mewburn (Secretary), Carla Clynick (Assistant Secretary) and John
Roberts (Treasurer).

2. TAPP’s Mission
TAPP was founded more than 11 years ago in response to community concerns about the
proposed Stockland development at Caloundra South (Aura). From that time the TAPP
mission has been: to protect and enhance the Pumicestone Passage and its catchment.

3. Membership
Currently there are 37 registered members of TAPP and there has been a gradual increase of
enquiries and new members in the past 12 months. There are however more than 100
interested individuals and groups who receive the minutes and the updates.

4. Key Areas of Focus and Activity for TAPP

4.1 The TAPP Website is now well established. The website will be updated in the next
couple of months. It has enabled easy access to what TAPP is doing and has enhanced
community awareness of the challenges that TAPP is facing in achieving its mission

4.2 The Convergence Forum was held in February 2021. The forum was ably led by Susie
Chapman from Healthy Land and Water, the TAPP Executive and Sunshine Coast and
Moreton Council representatives as well as the University of the Sunshine Coast. Its aim to
bring all key stakeholders and the wider community together, both face to face and on-line, to
develop trust and a shared understanding of the cultural knowledge and scientific research
about the Pumicestone Passage and the hinterland was achieved. The forum focussed on
seven key areas: traditional knowledge, community science and stewardship, agricultural
knowledge and practice, marine habitat and species, climate projections and adaption,
sustainable development and terrestrial habitat and species.
The videos of all the presentations and responses to all the questions asked at the
Convergence are now on the TAPP website.

4.3 The Aura development formally known as Caloundra South continues to expand rapidly
given the migration of people from the southern states. Stockland, the developers, are still
meeting with Healthy Land & Water, TAPP and other community groups. These groups
continue to exert pressure on Stockland to minimise the impact of the development on the
natural habitat.

4.4 The TS Onslow Project is coming to maturity. The mangroves are growing even though
the mangroves that were vandalised have not recovered. The planting on the sandbank
foreshore continues to be very successful and the plants are now well established and are
being maintained. Sand has recently been deposited to fill the large open area at the southern
end of the site and mesh has been laid. However the plants are struggling to survive. Thanks
to all who have contributed and a special thanks to TAPP members who are maintaining the
site, to Ken and Susie for organising the planting of extra mangroves and to those who
helped with the planting. A sign designed by a local artist has been erected at the site to
inform the community about its significance.
BMT consulting has been engaged by the Coastal Councils Adaptation Taskforce (C-CAT) to
survey and evaluate the capacity of Nature-based solutions (Nbs) to reduce risk associated
with coastal hazards. The TS Onslow site has been earmarked to be part of this study.

4.5 TAPP initiated a Bush Care group and has begun work on a section of the Golden Beach
foreshore extending for about 300 metres south from Bill’s Boats letting area. TAPP members
were joined by local community members and by members from Pacific Rotary Club.

4.6 The Bells Creek Regeneration Project has commenced. TAPP, Healthy Land & Water
and the local Sunshine Coast Council have formed a partnership to deliver the project with a
promise of support with signage and advertising from Henzells. TAPP’s role is to monitor the
project with its partners and to provide payments from a Federal Government grant through
Healthy Land and Water to contractors. Already planting and weeding has started.

4.7 The proposed Stockland Hall’s Creek development continues to be of grave concern for
TAPP members. The local Sunshine Coast Council is opposed to the development and our
local councillors Landsberg and Baberowski are fully supportive of stopping the development.
Pressure appears to be mounting on the state government to provide more land for
development because of population increase. Beerwah East is not shovel ready as yet. The
fight to save the green space south of Bells Creek Road continues so that the Passage is
protected.

4.8 The duplication of a second highway on the eastern side of the Bruce Highway has
not been taken off the future highway planning scheme. The TAPP Executive has raised the
issue with Jason Hunt the local state government member.

4.10 The Palm Lakes development at the Pelican Waters Golf Course continues to be of
concern. The development manager has not responded to a number of email sent to him. The
TAPP Executive will follow up and organise a meeting with the developer.

4.11 The Henzell’s Southern Lakes development is well underway. Henzells asked support
from TAPP for the change in the development plan for Jensen Park. The work on the park is
almost ready to start.

4.12 A TAPP Recognition Award is established. Ken has been the first very deserving
recipient.

4.13 Houseboats continue to cause problems in the Passage. There is little or no enforced
regulation of the by-laws. Ben from MSQ spoke at a TAPP meeting and it appears that MSQ
has done an inspection of the anchored boats.

4.14 A Speed Limit Submission has been initiated by TAPP to address excessive speed on
the Passage. A process has been designed to advocate change in the current legislation.
Local community groups and peak bodies have been invited to send a letter of support for
the Submission as an initial step. The respond has been very supportive.
A recent example of why it is urgent to address the speed issue is the big increase of PWC
on the Passage and the application for a Sea Plane to land on the northern end of the
Passage.

4.15 A Management Body for the Pumicestone Passage has been incorporated and a
launch was held at the Chilli Cafe in June.

4.16 The Caloundra Liveability Alliance is a loose network of community groups in the
Caloundra area who commit to support one another in initiatives which seek to improve
liveability for residents. TAPP is supporting the alliance.

4.17 The Ramsar public information signage has been erected at the TS Onslow site.

4.18 The Federal Government has reviewed the current Environment Protection and
Biodiversity Conservation Act 1999 (EPBC Act) and the key recommendations to set up an
independent body to oversee the implementation of the Act and to conduct proactive
research in order not to unnecessarily hold up proposed development have been rejected by
the federal Environment Minister. It is very disappointing.

4.19 TAPP is part of Terry Landsberg’s Division 2 three monthly consultation. It is a useful
forum for community groups to share what they are doing, to explore ideas and to seek his
help where necessary.

4.20 The TAPP Executive met with Jason Hunt the state government member and discussed
our major concerns. Jason is very supportive of the areas that TAPP is pursuing.

4.21 Bribie Wash Over has caused a high level of concern in the local community. Dr Sel
Sultmann was invited to a public meeting initiated by Jason Hunt. Ken Mewburn, Graeme
Smith and Paul Harney continue follow up with further questions with Sel. A meeting is being
organised by Jason Hunt with Sel to get further clarification of the scientific research he relies
on to support the theory that human intervention has had no impact on the erosion of the
northern end of Bribie Island.

4.22 World Environment Day was turned into a monthly festival in 2021. TAPP initiated a
local community gathering but it had to be cancelled due to inclement weather predictions. It
was well supported by local community groups and the intention is to have a similar event
next year on June 5.

4.23 ABN has been obtained for TAPP. Thanks to Carla for applying to the Tax Office.

4.24 An Eco Caravan Park is proposed for the Roy’s Road property. Ken and Paul have met
with the developers. The initial impression is that the developers are committed to improving
the eco-systems on the property.

4.25 TAPP has contributed to developing the Sunshine Coast and Moteton Bay Councils 4
year Strategic Plan for the Pumicestone Passage. The Plan will be finalised in the next
couple of months.

4.26 A Caloundra Community Hub is being established at the old tourist information site
along Caloundra Road. TAPP is supporting the Rotary group leading this project.

4.28 Ken continues his speaking engagements at the university, schools and to a variety of
local groups about the Pumicestone Passage and the work of TAPP.

4.29 TAPP polo shirts idea will be pursued after Covid.

5. Conclusion
Thanks again to all TAPP members and the Executive for all that has been achieved in 2020 –
2021 in spite of the limitations imposed by Covid-19. We have continued to meet monthly.
Let’s continue to work together and with other groups that share our mission to protect and
enhance the Pumicestone Passage and its catchment.