TAPP (Take Action for Pumicestone Passage) Inc. was created as a result of a public meeting held in
Fraser Park, Golden beach on 30th November, 2010. A community group united on 1st December,
2010 in response to concerns about the ULDA involvement in the fast track development of Caloundra
South.

Caloundra South is a large Master Planned estate situated south west of Caloundra in an area that is over 40% flood plain and bordered by three creeks, Bells Creek, North and South and Lamerough
Creek to the east. This development was considered to create an unacceptable potential risk to the
health of Pumicestone Passage. TAPP considered an environmental assessment of the project under the
EPBC Act 1999, an essential prerequisite for development.

In response to these concerns, TAPP created a petition to present to SEWPAC (Dept. of Sustainability, Environment, Water, Population and Communities). TAPP, principal Spokesperson, Alana Kirchoff,
received approval for the petition and group members started to walk the streets to collect signatures on
New Year’s Eve, 2010. We aimed for 10000 signatures before the March deadline to present the
petition. We got over 13500. 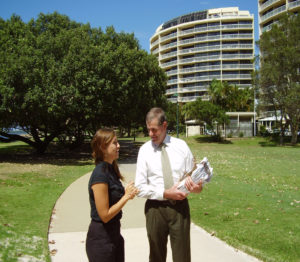 Petition being presented to the Hon. Peter Slipper, member for Fisher at Fraser Park, the location for the origin of TAPP.

The petition carried 13,555 signatures accepted by the Federal Parliamentary Petitions Committee. The petition was tabled in Parliament by the Hon. Peter Slipper on 24th March, 2011, at 1:47pm in a 90 second members Statement time.
As the group had listed ongoing environmental monitoring of urban development in the Pumicetone
Catchment, it was considered that the group would benefit by Incorporation and our Incorporation was
issued on 18th March, 2011.

SEWPAC intially advised TAPP that an assessment could not be undertaken without a request from
either the owner of the land or the QLD Government. SEWPAC eventually agreed to undergo an
assessment following an application by Stockland for referral under the requirements of the EPBC Act
1999.

TAPP Inc. has never actively campaigned to stop the Caloundra South development, however, we have
been vocal and active in efforts to ensure all environmental impacts are recognised and satisfactory
efforts made to mitigate these.

The development will create an ultimate surburb the size of the city of Gladstone. There will be 25000
dwellings and 50000 residents ultimately over the 20 – 30 year development period.
The ULDA, a Government instrumentality created under the Urban Development Act., 2007, took
control of the development from the Sunshine Coast Council in November 2010 in an effort by the then
Labor Government, to fast track the development. This removed control of the project from the local
council and therefore the community. Amendments to the existing development scheme produced by
the council and reflecting community input was scrapped and a new scheme produced by the ULDA.
This did not necessarily include any of the community input.

TAPP Inc. campaigned strongly to get access to ULDA and Stockland to have input into the
progressive development and along with other Community Groups managed to get a good relationship
with Stockland. 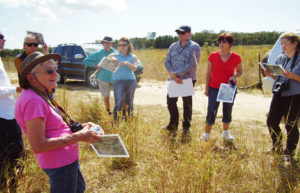 TAPP Members on a site visit to Caloundra South

TAPP Inc. has continued to discuss progressive stages of the development process with Stockland and
to a lesser extent, with the ULDA.

TAPP Inc. was fortunate to be granted a tour of the development site by Stockland and have spent
many hours involved with review of the PER (Public Environment Report), the method by which the
development will be assessed by SEWPAC. Following public submissions to Stockland, the PER was
amended and the final version was sent to SEWPAC on 23rd April, 2013. Approval was granted on
6/6/13 with a number of restrictions imposed.

Stockland have made many changes to the development plan as a result of input and discussion from
community groups, such as TAPP.

Stockland have agreed not to have any direct access to Bells Creek from Caloundra South and even this boat ramp will be difficult to access from the development. 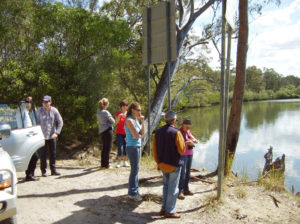 This action by Stockland won’t, however, prevent an increase of recreational use of Pumicestone Passage which will be a natural result of the population increase.

Recreational impacts are one section of the PER to be reviewed under the EPBC Assessment. Major concerns were held about water quality in Bells Creek and the Passage as a result of the earthworks during construction and the large fill requirements to ensure dwellings are above a 1 in 100 year flood event. Stockland have made changes to their original water management plans to improve
ultimate water quality. 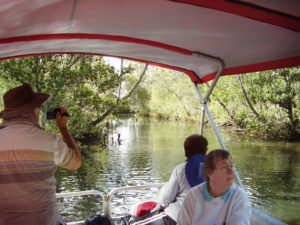 TAPP Inc. members on an information trip on Bells Creek South to study the area and view the current
condition and the potential for adverse environmental impacts.

TAPP will continue to be involved in reviews of the Passage and assist any way possible to ensure that
the region is not adversely impacted by avoidable human influences. These impacts could be from a range of reasons. Recreational, development, population impacts and inappropriate response to impacts that change natural influence within the Passage.

Currently there are studies of wetlands and agricultural activities within the catchment being conducted.This is a good start for a much needed understanding to retain the Passage as the iconic
feature of the Sunshine Coast that it currently is.

Erosion on western side of Bribie Island environmental reserve in Pumicestone Passage. The island is
expected to break through somewhere near this region in the near future. The consequences of a breakthrough do not seem to be fully understood. 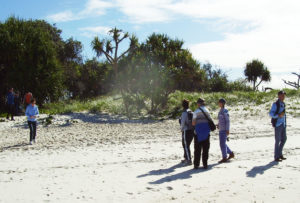 TAPP members inspect Bribie Island on the eastern side in an area expected to break through. The ocean has flowed over at this point on several occasions of high tide and storm situations.

TAPP will continue to be involved in reviews of the Passage and assist any way possible to ensure that the region is not adversely impacted by avoidable human influences. These impacts could be from a range of reasons. Recreational, development, population impacts and inappropriate response to impacts that change natural influence within the Passage.

Currently there are studies of wetlands and agricultural activities within the catchment being conducted.This is a good start for a much needed understanding to retain the Passage as the iconic
feature of the Sunshine Coast that it currently is.