TAPP takes interest in the continual monitoring of the  ocean breach of Bribie Island into areas of the Pumicestone Passage, investigating and discussing the published data on effects on the Passage in regard to the break.

Please find below a recent letter from SC Council  (10/02 /2022)  to the residents who may be impacted by the Breakthrough.

Dear resident
Re: Bribie Island breakthrough
As a resident of Golden Beach, we would like to let you know that Sunshine Coast Council is watching the impact of the Bribie Island breakthrough on the mainland closely and responding as able.
The Pumicestone Passage is very dynamic at the moment and the situation is changing rapidly. For the more up to date information on council’s response we ask that you visit www.sunshinecoast.qld.gov.au/bribieplan

This webpage will be updated regularly with any new observations, investigations, actions or information from council that becomes available.
As way of background, council has been preparing the Golden Beach foreshore for a breakthrough at Bribie Island since 2014 through the Bribie Island Breakthrough Action Plan.
Guided by the plan, council’s actions to date have included:
• regular monitoring of the area through beach surveys along Golden Beach, to provide a long-term and reliable source of data to base our decisions on
• annual dredging program for the Pumicestone Passage to renourish the sand along Golden Beach
• upgrading local infrastructure, which includes replacing the degraded geobag groynes with rock structures at Oxley Street, Leichhardt Street, Wills Avenue and Jellicoe Street and a number of seawalls along the foreshore around Jellicoe Street, Tripcony Lane and Lamerough Canal entrance.
In addition to this plan, council’s recently endorsed Coastal Hazard Adaptation Strategy pathway for Golden Beach includes a focus on resilient homes, reviewing planning controls and drainage investigations.

Please note that the management and monitoring of North Bribie Island is a Queensland Government responsibility as this section of Bribie Island is a National Park. Council will support the Queensland Government as required; however, our focus remains on Golden Beach.
As outlined above, for council’s most recent observations and actions please visit

Below is a Paper written in 2021 after the initial wash-over event. This was researched and presented to the Local and State authorities.

A RESPONSE TO BRIBIE ISLAND WASH OVER EVENT

2.1 There is geological agreement that the Pumicestone Passage was formed following the rise in sea levels during the Holocene Transgression, 18000 to 6500 years before present time. The Passage was most likely formed due to the flooding of the Elimbah Creek floodplain.

2.2 Photographic evidence indicated from 1842 to the 1950’s the northern end of Bribie Island was approximately 300 metres wide.

2.3 Erosion caused by huge weather events did occur over this period but nature restored the damage caused.

2.4 Photographic evidence during the 1950’s indicates that scalloping (erosion eating into sections of the Island) began to appear on the eastern side of the Bribie Island. 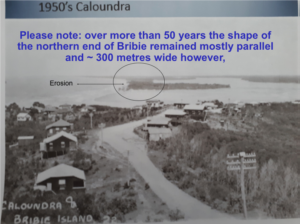 2.5 This change coincided with dredging of the North West Channel during and after the Second World War to allow 10,000 tons ships to enter the Port of Brisbane.

2.6 Dredging of the North West Channel has continued since the 1950’s and the channel has been widened from 100 metres to over 220 metres and has been deepened from 10 metres to 20 metres. This has resulted in removing many millions of cubic metres of sand for industrial use.

2.8 Dredging in Spitfire Channel began in 1994. Again, on current estimates more than 80 million cubic metres of sand has been take for industrial use. Spitfire Channel is approximately 20 km from the wash over area. 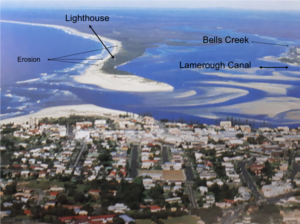 2.8 During the 1980’s the Pelican Waters canal development commenced. The developers removed Lamerough Creek’s mangroves and vegetation and build new deep channels in the wetland that fed into Lamerough Creek.

2.9 The velocity of the water flowing in and out of Lamerough Creek increased dramatically and erosion began to occur on the western side of Bribie Island at this time.

2.10 The current wash over (below) is where the water flowing out of Lamerough Creek flows across the Pumicestone Passage and hits the shore of Bribie Island. 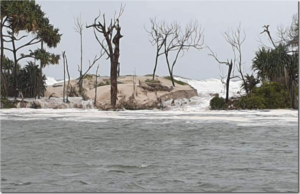 2.11 The groyne at Kings Beach allows sand accretion on the beach. The channel at the Caloundra Headland begins to flow south at this point along the eastern side of the Island. The impact on the Island is unknown.

2.12 Weather events have continued to occur over the past 70 years but the Island has not been able to repair the erosion as nature did for the previous 110 years. 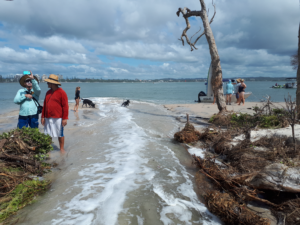 What will happen if nothing is done?

3.1 The recent findings of the Coastal Hazard Adaption Strategy commissioned by local Councils indicate that the sea level is rising.

3.2 There is consensus that if nothing is done there will be a break through where the wash over has occurred however the extent of the break through is unknown.

3.3 Erosion will continue on both sides of the northern end of Bribie Island.

What can be done?

As the result of inactivity over many years there is need for urgent action. The northern end of Bribie Island has to be protected and restored. The Australian nation is on the brink of losing one of the unique waterways of the world.

The following strategies are suggested however this is not an exhaustive list:

4.1 An active berm should be constructed to direct tidal flows from the edge of the dune on the western side of the Island however the back dune needs to be stabilised first. This will widen the Island to enable re-growth of mangroves and vegetation.

4.2 A retention fences should be constructed on the eastern side of the Island right up to the dune to help nature restore the damage that has been caused by the wash over.

4.4 The current navigation channel within the Passage at the northern end of Golden Beach should be moved east of the current channel by about 200 metres.

4.5 The current navigation channel within the rest of the Passage between Nelson Street and Lamerough Creek should be moved to the centre of the Passage.

4.6 The wash over areas should be fenced off and clear signage should indicate entry to the wash-over site is prohibited. Similarly, an exclusion zone should be established to prevent boats mooring.

4.8 The speed of motorised vessels on the western side of the Island should be reduced to 6 knots out to 100 metres from the shoreline of the Island and to 20 knots in the Passage.

4.9 Designated pathways at the northern end of the Island should be constructed to control entry points across the Island.

4.10 The laws pertaining to dogs, four-wheel drives and trail bikes prohibited in National Parks should be enforced to protect the environment.

4.11 MSQ should enforce the law and Rangers should be employed to ensure compliance.

Pumicestone Passage is one of the few barrier estuaries in Australia. It is a significant part of the Moreton Bay Ramsar Wetlands and we carry international obligations to preserve and protect the area. As well, the preservation of the northern tip of Bribie Island is important for the well-being of residents particularly in Golden Beach and Pelican Waters.

NOTE: The information is this paper has been assembled from the following documents: