There are two major concerns regarding the Inter-Urban Break and the health of the Passage.

1 – The potential development in the Inter Urban Break and how this will influence the Quality of Water in the Pumicestone Passage.

2 – The study into the Duplication of the Bruce Highway through the wetland on the eastern side of the existing highway. 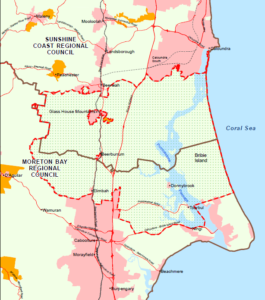 Fact: The PFIGA will reduce the size of the inter urban break with Moreton Bay.

The Caloundra City Plan (2004) identified the northern extent of the inter-urban break with Moreton Bay. The PFIGA area lies within the area designated by Council as open space / inter urban break. Council has consistently used the boundary identified in the Caloundra City plan since then.

Development here will reduce the area that has been designated by Council as part of the inter-urban break since 2004. It is important to recognise that the inter-urban break is not just a line of trees that shield urban development from view as you travel along the high way. It is actually an undeveloped area of open space that is available to the community.

The key Values of the  inter-urban break are:-

Individual Health and Well Being

The IUB has a diverse range of landscapes including the iconic Glass House Mountains, Scenic Ramsar protected wetlands with the Pumicestone Passage, Sandy Beaches of Bribie Island as well as a range of forested and agricultural landscapes. Due to these intrinsic values the IUB is of immense importance to the SEQ region in particular as a tourism and recreation destination and is now considered to be worth $8 Billion per annum.

Fact: Urban development in the IUB  has consistently been rejected by Council since the early 2000’s

Caloundra and Moreton Bay Councils submitted to the Qld Regional Plan requesting that the IUB be protected in perpetuity.

In its submission Sunshine Coast Council called on the State Government to: “delete all reference to the  ‘Caloundra South Extension’ (Halls Creek) investigation area and keep the land classified in the land use category of Regional Landscape and Rural Production Area”

Fact: Potential Development could add a further 35,000 to the total predicted population in the catchment.

At the 2011 census the population living East of the Bruce Highway between Roys Road and Lake Currimundi ( the catchment for Pumicestone Passage)  was 47,762. Infill development in and around Caloundra will increase the population by around 40,000 people over the next 35 years. The approved development of Caloundra South will add a further 50,000 people to this.

Fact: Run off from the PFIGA  will impact on Pumicestone Passage

Storm water runoff from the area will flow directly into wetlands that are part of the internationally protected Pumicestone Passage wetlands area.

Fact: Forestry can continue as a viable industry

In order for the land to be available for urban development the forestry leases would need to be bought out or surrendered. Development in the area will reduce the available forestry land and create a reduction in agricultural output in the IUB.

Is the PFIGA really required under the SEQ Regional Plan as the State claims?

The SEQ Regional Plan included the Halls Creek IGA as well as the Beerwah East IGA. as potential growth areas.

In preparing the new planning scheme Council undertook extensive investigation and concluded that sufficient area was available without inclusion of the PFIGA as shown in the SEQ Regional Plan.

Due to the exponential growth in our area Caboolture West is under development. This will hold approximately 70,000 residents. This development is also in the Pumicestone Passage Catchment and in the IUB. As this is a priority development area (PDA) and as such is controlled by Economic Development Qld (EDQ) which means that there is very limited opportunity for public input.